How to set up a monogram for machine embroidery

By Julie on February 9th, 2021
This site contains affiliate links to products. We may receive a commission for purchases made through these links. 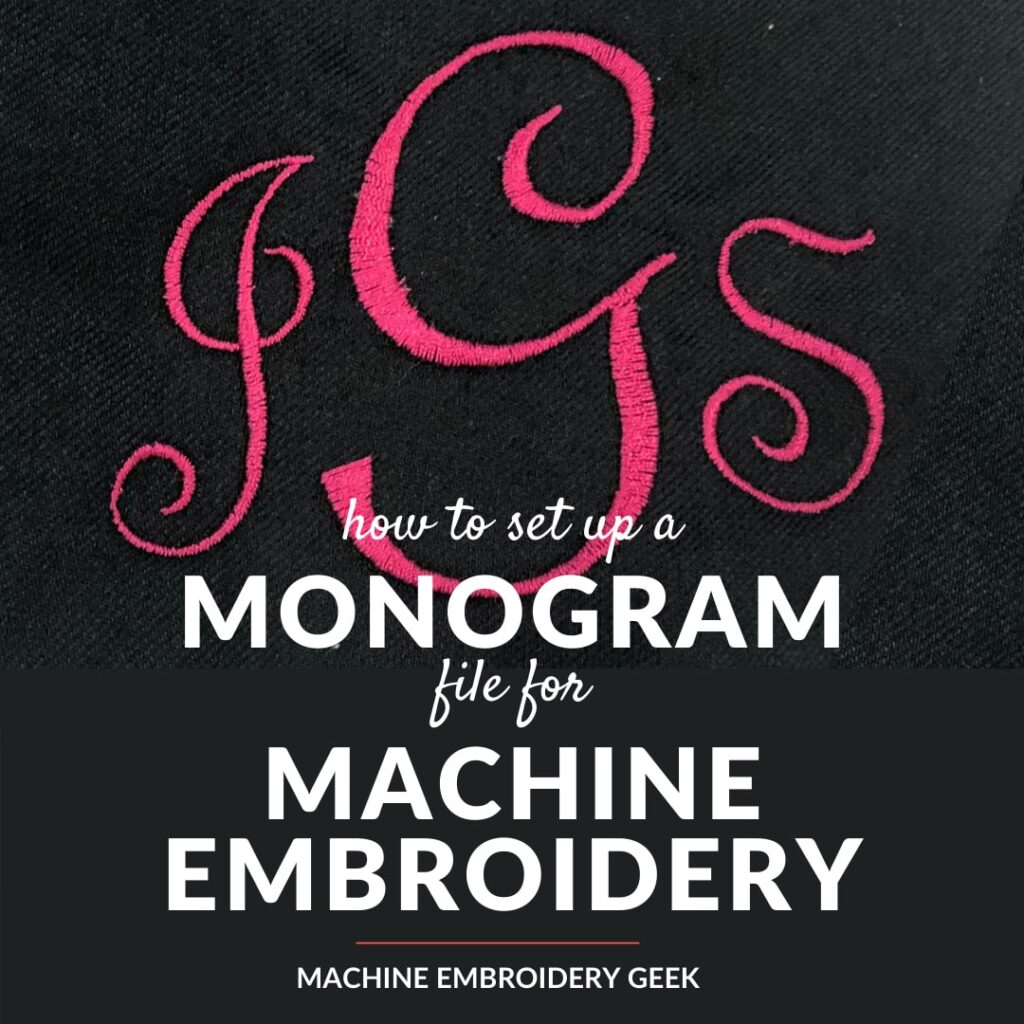 Perhaps one of the reasons why you bought an embroidery machine was to be able to add monograms to home decor and clothing items. That’s certainly a good reason, and a very common reason.  In fact, some people refer to embroidery machines as a “monogram machine.” However, before you can monogram anything, you will need to know how to set up a monogram file and get it onto your embroidery machine.

Fortunately there are a lot of ways to go about setting up a monogram, and it doesn’t require a lot of fancy and/or expensive embroidery digitizing software. In this post, I will walk you through three different ways to set up a monogram file and get your embroidery machine to stitch it out.  And, you will be well on your way to monogramming just about everything!

How do you make a 3 letter monogram?

If your monogramming something for a couple, the convention is to prominently display the shared last name initial largest in the center with the woman’s first initial on the left and the man’s first initial on the right. For same-sex couples I would imagine the order of the initials it doesn’t matter, but to be safe, I would ask the couple. Another tricky situation? Couples who don’t share a last initial. Again this may require some consultation with the couple for whom you are creating a monogram.

When to ignore traditional monogram convention

If I’m embroidering on a shirt cuff, a front pocket of a man’s shirt, or a bow tie for a man, I often ignore monogram convention and just stitch out a man’s initials, in order, all the same size.  I typically use a bold sans serif or a classic serif.

Monograms don’t always have to be comprised of three letters. Single initial monograms are lovely on home decor items. A single bold first initial can also be kind of fun and retro. (Think Laverne’s sweater on Laverne and Shirley)

I also like to stitch a single initial monogram inside of a decorative wreath. This is a pretty and sophisticated look suitable for linen, hand or kitchen towels.

What size should monogram letters be?

Typically, the size of your embroidered monogram should be proportional to the size of the item you are embroidering on.  On bath towels, I typically make my largest letter about 4″ tall.  For hand towels, the largest letter is usually about 2.5″ high.

However, this is a rule that can be broken. A few years ago, sweatshirts with oversized monogram letters stitched out on the front were super popular.  And, when I mean oversized, I mean each letter was like 8″ tall.

So, what size should your monogram letters be? Whatever the heck size you want.

If you are setting up a traditional monogram file, you may wonder what the size difference should be between the letters.  While there are no hard fast rules, I typically make the side letters about 75 to 80 percent of the center letter.

Depending on the chosen typeface, the stitching of the letters may overlap slightly. For example a very curly typeface might have loops and tails that crossover on top of  each other. If the letters do overlap, be mindful of which letter you want to have on top. I would most likely stitch out the center letter last so that it will appear most in the foreground since it is the most dominant letter.

Setting up a monogram embroidery design

Method 1: create the monogram on the machine itself

Once I have all three letters on the screen, I adjust position and size individually. My machine has a feature that allows me to toggle through each one of the letters that I’ve put on the screen and change its position in scale. So I would move the left most initial over to the left, and the right most initial over to the right. Then, I would scale up the center initial so that the proportion looks correct. Once I am satisfied with the relative proportions and spacing of the letters, then I select all three letters and scale them appropriately.

Although this is a perfectly acceptable method for creating a monogram, the five built-in typefaces can get a bit old.

Method 2: Set up a monogram file in SewWrite

Another method of creating a monogram file is by using the very inexpensive software from S&S computing called SewWrite. For only $40, you get 70 pre-digitized typefaces, some of which make very good looking monograms. The benefit of working with pre-digitized alphabets is that the letters will stitch out nicely at any size.

All you have to do is type the three initials, then select the typeface you want to use. I played around with a few different typefaces but eventually settled on French Script MT. 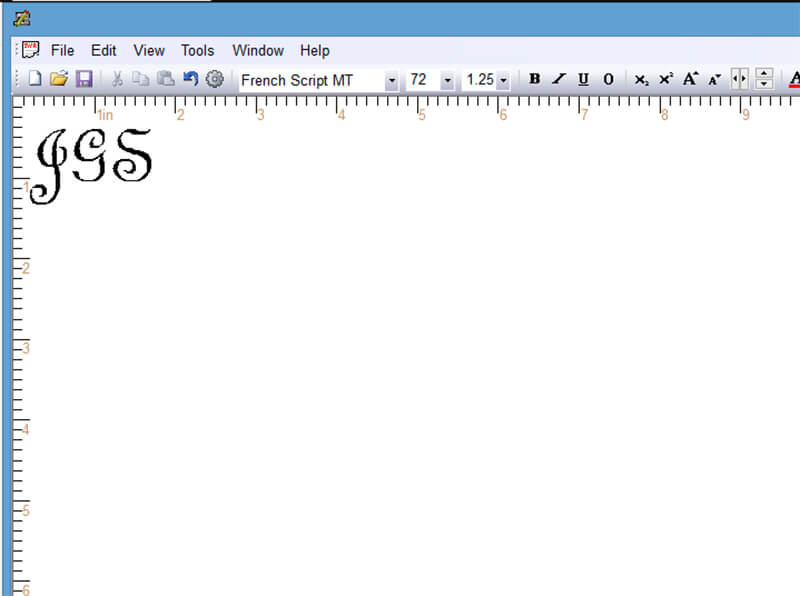 After I chose the typeface, then I modified the size of the letters so that they were all the size of what I ultimately wanted the center letter to be. Then, I selected the Large Mid, ctr option from the top down menu.  This modified my text so that the center initial was larger than the other two.

Finally, once you’re happy with your monogram, all you have to do is save it. Any time you save an embroidery file in SewWrite, it also saves a file in SWR format. SWR is a SewWrite native file format that you can reopen, edit and save out another embroidery file.  So, in addition to the SWR file, I also generated an EXP file because it is the format my embroidery machine reads 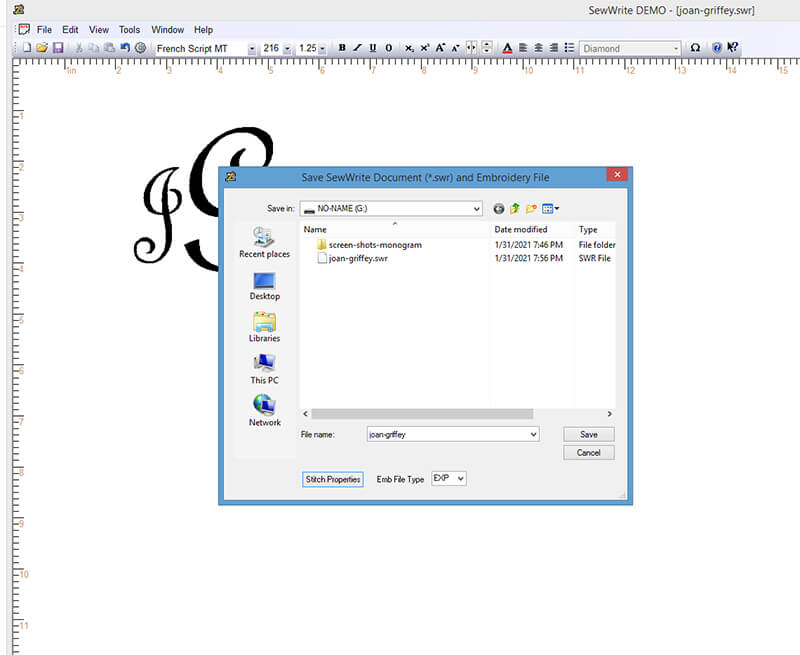 Embrilliance Essentials is the most bare bones software in the suite of applications made by Embrilliance.  You can actually can get a FREE version of Embrilliance Essentials that works really well for setting up monogram files.  The only catch is that there are not built in fonts like there are in SewWrite.  The upside is, however, that Embrilliance reads BX fonts which you can purchase from most digitizers who sell embroidery fonts. Check out some of my favorite embroidery fonts for creating monograms.

BX fonts are really great because they many are SCALABLE and they open in Essentials.  So instead of combining letters as embroidery files together one by one to spell a word, with BX fonts, you simply type the word or initials you want and then manipulate in the software. Learn more about what makes BX fonts so great and how you can work with them in Embrilliance.

To create a monogram file in Embrilliance Essentials, you simply load the BX font into the program. Then you select it and type out the initials in monogram order (first, last, middle). Finally, choose the modifier to distort the letters into the style that you want. 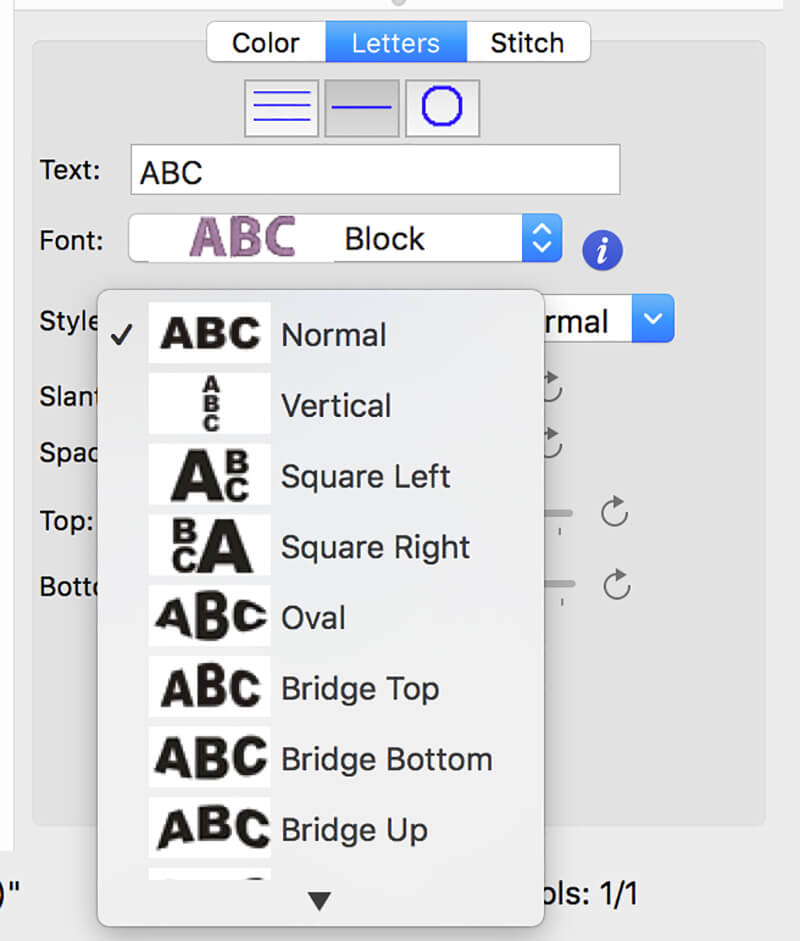 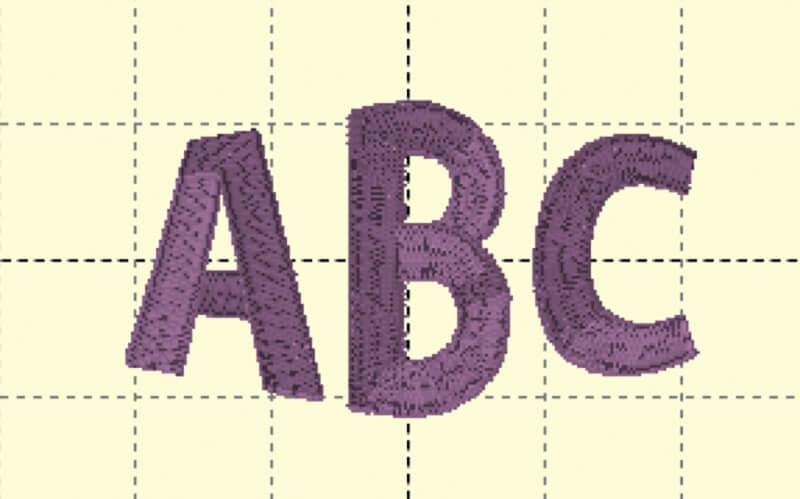 Once you have scaled and modified the letters to the desired size and shape, all you need to do is save the embroidery design in the file format you need. 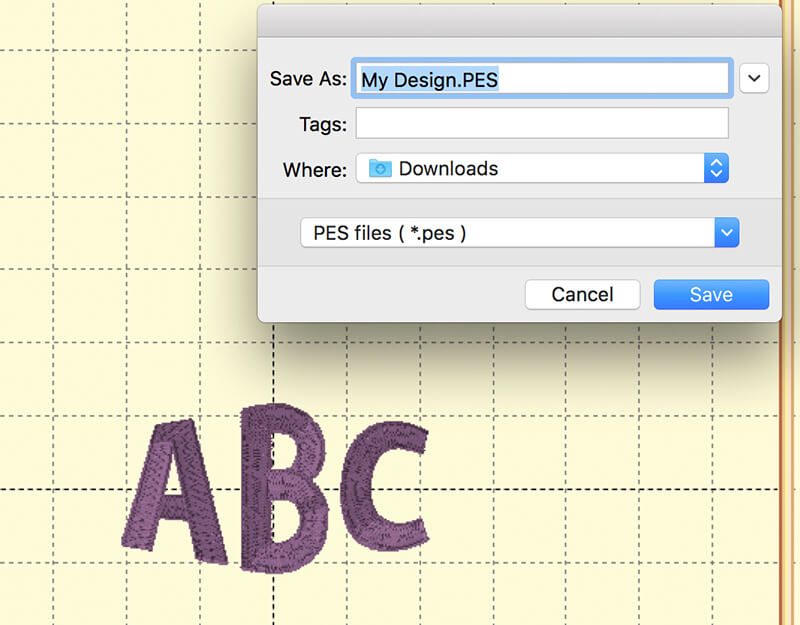 Method 4: Set up a monogram file in SewWhat-Pro

Sew What-Pro is somewhat similar to Embrilliance Essentials is that it is an embroidery file editing tool.  One of SewWhat-Pros’s coolest features is that you can map embroidery fonts to each letter on your keyboard. So, to create the monogram, you just import the typeface, map the letters to the corresponding key on your keyboard and type out the letters of your monogram.  Finally, you would simply scale up each of your letters so that they are the appropriate size and proportion.

The benefit of creating a monogram file in SewWhat-Pro is that you can type with any embroidery font, and it doesn’t need to be a BX font.

Not bad, huh? You see there are many ways to go about creating a monogram. Now you can get started monogramming everything.

Want to remember this? Save “How to set up a monogram for machine embroidery” on your favorite Pinterest board 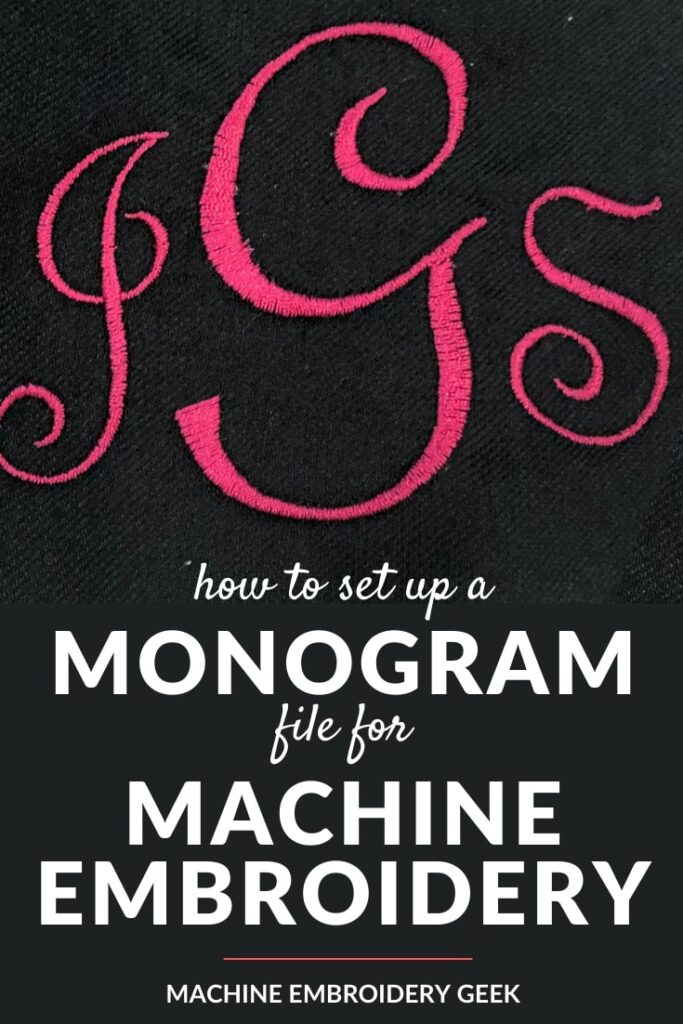 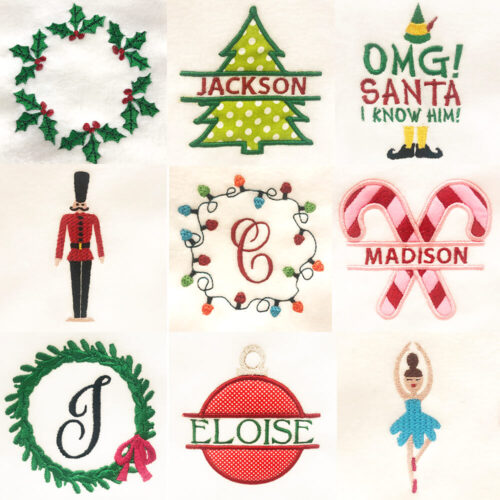